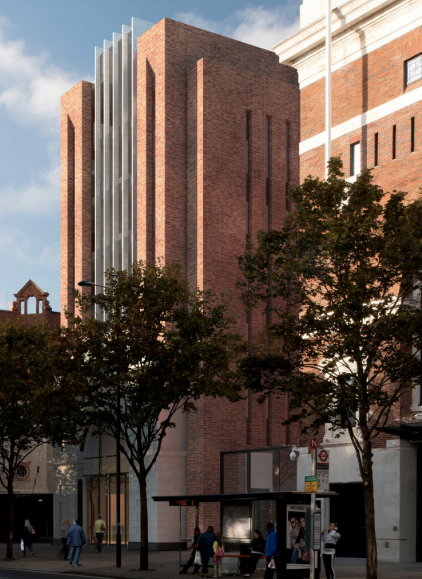 The historic Shepherds Bush Palladium built in 1910 – once home to one of London’s earliest cinemas – is being converted into serviced apartments by Dorsett Hospitality International.

Planning permission was granted for the addition of eight storeys to the building to accommodate 74 apartments, that will sit alongside 8,500 sq ft of commercial space on the ground and lower ground floors.

The original façade along with historic details of the Edwardian property will be retained as part of the scheme, while blending it with the brick work of a new art deco inspired building.

Overlooking Shepherds Bush Green, the development is located between two Grade II-listed buildings: the Pavilion, formerly a cinema and now the Dorsett Shepherds Bush hotel, which will service the new apartments, and the Empire, a music venue which once housed the BBC

The ground floor of the Palladium will feature a restaurant linked to the hotel via a glazed courtyard entrance, while the lower ground floor will accommodate a café and entertainment space.

Guests at the apartments, which will range from 246 sq ft to 408 sq ft, will be able to use the two restaurants, bar, business centre, gym and spa at the hotel.

The Palladium originally opened as the Shepherds Bush Cinematograph Theatre, before relaunching, with a new, grander façade, in 1923 at the Shepherds Bush Palladium. It was modernised in 1968 and relaunched as the Classic, before being taken over by Odeon in 1973. The building later became the Walkabout pub and was converted to offices in 2013.

Building works commence during the Spring of 2018, with the opening of the apartments targeted for completion during 2019.