Studio in a Ruin 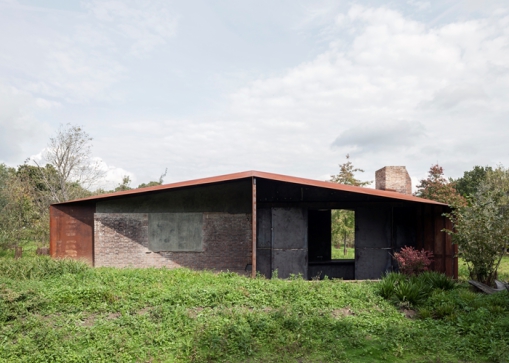 'This project is the transformation from an unremarkable ruin, within an unremarkable field, in to a beautifully poetic building. It is part of a collection of buildings and installations created within the grounds of a family home, commissioned by a patron of art and architecture.'

The building forms part of a trail around the grounds of the property. The building exists also as a standalone building. The building holds a charm due to its scale and configuration inside.

The artist's studio is much bigger than the photos convey and, whilst it is one open plan space, its change in level splits it in two. One part is semi-buried within the ground and provides the basic infrastructure, water and power with the open fireplace providing the source of heat for the building.

The upper space is set at ground level, focusing on the remains of an old inglenook fireplace and a new wide window opening out to views of the countryside.

The ruin was once a farmhouse, with little left standing except for a small part of the brick perimeter walls. It was decided to keep what remained and build a new studio around it. The concept include materials with a raw finish: polished in-situ concrete to the walls and an insulated Corten steel roof to maintain the rustic charm.

It is carefully choreographed to fold and extend beyond the building, in order to frame views, create covered outside spaces and to blend in with the gently-undulating landscape. Opportunities have been taken to create large windows where no walls remain, perfect for capturing the surrounding landscape.

The design process was very rigorous yet controlled, with interesting dynamics and flexibility to allow the local trades to make their own mark on the building whilst coordinating with the lead design team.

The flexibility also plays out within the use of the space, which is both a pottery and sculpture studio as well as a place for the kids to play and camp out in.